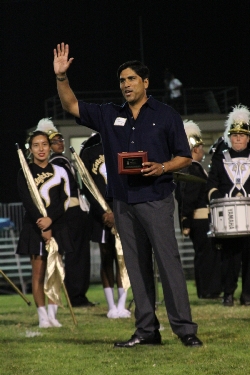 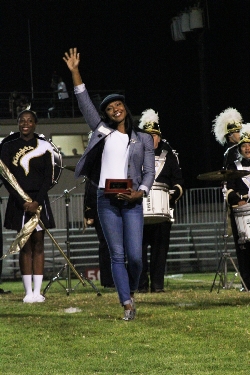 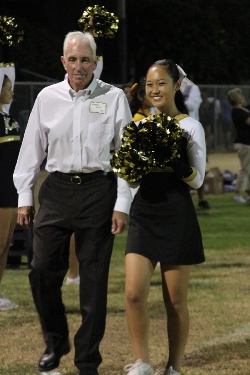 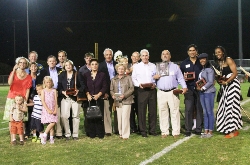 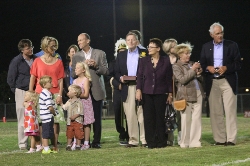 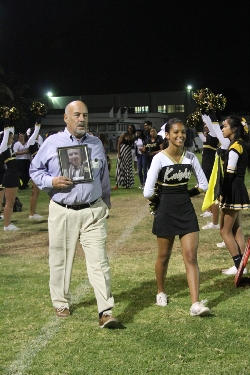 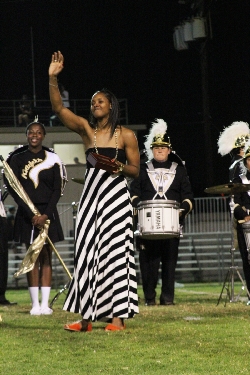 Torrance, CA (September 9, 2013): On Friday, September 6, Bishop Montgomery inducted six new members into the Athletic Hall of Fame at a ceremony on campus. The six new members, the third class to be inducted, are Dr. Rodney Stetson (posthumously), Forrest Hunt '61, Irl Davis '66, Mike Gonzales '82, Carmelita Jeter '98, and Noelle Quinn '03.
Prior to the Knights' football game against Contreras High School, BMHS hosted a reception in the gymnasium for the public to meet the new inductees. During the reception, the inductees were introduced to those in attendance and they spoke to the audience. At halftime of the football game, the inductees were presented to the crowd during the second part of the ceremony. (Note: the Knights beat Contreras 25-0)
Dr. Stetson, BMHS' team doctor from 1959-1976, was inducted posthumously. In attendance to accept the honor on his behalf were several of his children: Mike '63, Patty '63, Dan '71, Jim '72, Ed '76 and Bill.
Forrest Hunt '61 is BMHS' first "star" student-athlete, earning 9 varsity letters in 5 different sports. He went on to teach and coach in the Torrance Unified School District for 38 years.
Irl Davis '66, who is the first baseball player in school history to letter all four years and the first to be drafted in the MLB, was unable to attend the event; however, he was represented by his friend and fellow Athletic Hall of Famer John Joseph '63.
Mike Gonzales '82 was a standout football player and track & field athlete at BMHS. He was an All-American decathlete at USC and he competed for both the United States and Puerto Rico in Olympic competition.
Carmelita Jeter '98 was an outstanding track athlete at BMHS. She went on to be an All-american at Cal State Dominguez Hills and she won three medals (1 bronze, 1 silver, and 1 gold) at the 2012 London Olympics.
Noelle Quinn '03 is the greatest girls' basketball player in school history. She also was a standout on the volleyball court. She had an All-American basketball career at UCLA and she currently plays for the Seattle Storm in the WNBA.

Read the complete bios of the inductees by clicking here.
To view pictures of the event, go to the Athletic Hall of Fame page and click on "Photo Album."

To watch Torrance CitiCABLE's coverage of the event, click here. (Coverage begins around the 7:40 mark of the video)
Print