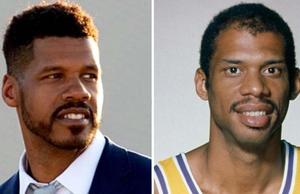 Alumnus Solomon Hughes '97 will make his professional acting debut in an upcoming HBO pilot about the "Showtime" Lakers. The 6'11" Hughes will play Kareem Abdul-Jabbar in the currently untitled show which chronicles the Lakers' 1980's basketball dynasty when the franchise dominated the NBA, earning five championship titles.
As noted in the Hollywood Reporter, Hughes will play Lakers center Abdul-Jabbar, whose intelligence, talent and political activism have solidified him as a living legend, but whose introverted nature led him to be misunderstood by both the public and his own teammates. After a lifetime of betrayals, it was the arrival of rookie Magic Johnson to the Lakers team that sparked Abdul-Jabbar's gradual journey to open up to those around him and, in turn, re-ignite his love of the game.
After graduating from Bishop Montgomery, Hughes continued his basketball career at the University of California, Berkeley, where he earned his B.A. in Sociology and M.A. in Education. After Cal, he played professionally in the USBL and ABA, in Mexico's pro league, and also entertained thousands across the country as a Harlem Globetrotter. Hughes also holds a Ph.D. in Higher Education from the University of Georgia and, prior to jumping into writing and acting, was the Assistant Director of the EDGE Doctoral Fellowship Program at Stanford and notable lecturer in the University's Department of Education.
Print