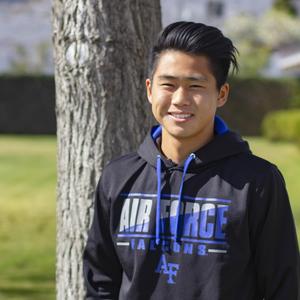 Congratulations to Jinta Sasamori ’20, who has accepted his appointment to the United States Air Force Academy. Jinta attended the Naval and Coast Guard summer programs, but ultimately decided on the Air Force because of his interest in aviation. He will be playing tennis for the Air Force Academy and has been one of Bishop’s top tennis players since he arrived at BMHS. Jinta is a 3-time Del Rey League MVP, 3-time Del Rey League Singles Champion, Daily Breeze All-Area 1st Team selection, and is currently ranked #43 in California. Jinta has helped lead our boys’ tennis team to three straight Del Rey League titles and the CIF-SS semifinals last year. He advanced to the quarterfinals in the CIF-SS Individual Tournament. We are proud of you, Jinta, and know that you will continue being an outstanding Knight while serving our country.
Print