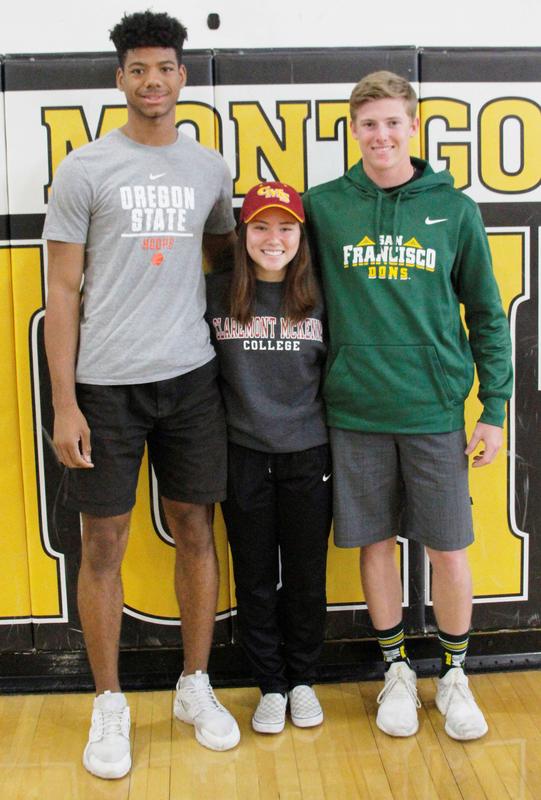 Torrance, CA (November 13, 2019): Surrounded by classmates, teammates, coaches, friends, and family, three Bishop Montgomery student-athletes made their college choices official when they signed national-letters-of-intent at a ceremony on campus today.

Nicole Hayase '20 (above, center), a four-year varsity basketball player for the Lady Knights, made her commitment to Claremont-McKenna College. Hayase is a three-time All-Del Rey League selection and has been an integral part of two league championships and a CIF title. Claremont-McKenna is the 7th ranked liberal arts college in the country according to U.S. News & World Report. Last season, Hayase averaged 7.8 ppg and 2.4 assists as the point guard for Bishop.
Isaiah Johnson '20 (above, left) will be the fourth Bishop Montgomery boys' basketball player in the last five years to head north to Oregon State University. Johnson follows Stephen Thompson, Jr. '15, Ethan Thompson '17, and Gianni Hunt '19. Last season, his first for the Knights, Johnson was an All-Del Rey League selection and helped the Knights to a league title and a CIF-SS Open Division Finals appearance. He averaged 8.8 points per game for Bishop.
Elijah Tolsma '20 (above, right) is a four-year varsity standout for the Knights' baseball team and will be playing in 2021 for the University of San Francisco. Tolsma is a two-time All-Camino Real League pick and is one of the top two-way players on the west coast. Last season, he hit .328 while playing center field for the Knights. On the mound, Tolsma set a new school record for lowest ERA (0.22), a record that stood since 1966.
Complete coverage of Bishop Montgomery athletics here or follow us on Twitter, Instagram and Facebook @bmhsknights
Print