Join Us at the Athletic Hall of Fame Induction 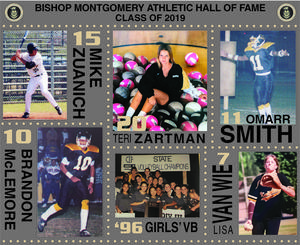 The class will be inducted on September 20, 2019 in a ceremony on campus. The event begins at 5:00pm in the main gymnasium and is free and open to the public.

Van Wie is one of the best softball pitchers in school history. In her 4-year varsity career, she was a 4-time all league pick, 4-time team MVP, and 3-time All-CIF selection. She threw 6 no-hitters, including the first perfect game in school history, and she is the school's single season record holder for wins with 18 in 1984. She went on the pitch at BYU.

McLemore was a standout in football and basketball for the Knights. On the football field, he was a 2-time all-league selection and he holds the school record for receptions in a season with 59. On the basketball court, he was a versatile and dynamic defender and helped lead the Knights to a league title his senior year. The 1995 Male Athlete-of-the-Year went on to have a great football career at Oregon as a defensive back.
Smith starred in football and basketball alongside McLemore. A receiver and cornerback in football, he was a 2-time all-league selection and was named to the Daily Breeze All-Area 1st Team Offense as a senior after hauling in 45 receptions and 8 TD's. On the basketball court, he was a fierce competitor for the Knights as a 2-year letterwinner. He played football at San Jose State and in the Arena Football League. He was inducted into the Arena League Hall of Fame in 2014.
Zartman has the distinction of being the first female All-American selection at BMHS. As one of the greatest volleyball players in school history, she was the leader of the 1996 team that captured a CIF title and the program's first state title. She was a 3-time all-league and 3-time All-CIF selection and as a senior she was named league MVP and CIF Player of the Year. She went on to have a great career at UC Irvine.
Zuanich is arguably the greatest hitter in the baseball program's history. He was a 3-year starter and 2-time all-league selection, including winning league MVP honors as a senior. As a senior, he broke five offensive records - batting average (.568), hits (46), doubles (14), total bases (69) and slugging percentage (.852) - all of which still stand today. He went on to play at UC Santa Barbara and he had a 5-year professional career with the Colorado Rockies organization.
The 1996 Girls' Volleyball team captured the program's first of several state titles. The team finished 24-6 under legendary head coach Kim Willeman and also won the Del Rey League title and CIF-SS Division 3AA title. Six players were named All-CIF and the team boasted both the CIF Player of the Year (Teri Zartman) and State Player of the Year (Danielle Graham). Six members of the team went on to play volleyball in college.
Read complete bios for all inductees by clicking here.
Print